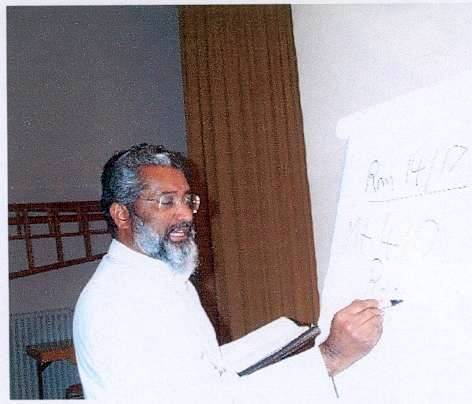 Fr. James Manjackal was born on 18th April 1946 at Cheruvally, Kottayam, Kerala in S. India, and was ordained a priest on 23rd April 1973 in the Congregation of the Missionaries of St. Francis de Sales (M.S.F.S) of the South West Province of India. One year he worked in the missions of Visakhapatnam. Then he was appointed professor at S.F.S. seminary, Ettumanoor, Kerala. It is then that he met Jesus through the prayer of a young man who invoked the power of the Holy Spirit upon him. Immediately he was healed both within and without and he started preaching charismatic retreats all over the world. It is he who preached the first charismatic retreat in Malayalam, his mother tongue, in 1976. He had to face various trials and sufferings in the last 34 years of preaching like a kidnap by his own people, and several arrests and imprisonment in Gulf countries by the non-believers. But in all these he proved himself to be a faithful and loyal servant of the Lord and his Church. Several times he served in the regional and national service team of the Catholic Charismatic Renewal (CCR).

In 1989 he founded "Charis Bhavan" the well known Charismatic retreat centre in Kerala, where he remained as its director and superior for six years. The congregation of the missionaries of Saint Francis de Sales has made his service available for the universal Church. Now he resides at Mermier Bhavan, Bangalore continuing the ministry of evangelisation among Christians and non-Christians alike both in and abroad the country. He has made several evangelical journeys abroad covering 87 countries in all five continents preaching retreats, leading conventions and healing services, conducting Schools of Evangelisation and pioneering missions among the Muslims in the Arabian Gulf. All his works of evangelisation especially among the Muslims to print Bibles, booklets, prayer books, etc. are supported by the help of many people all over the world. Whatever help given to him always goes for the works of evangelisation. He is the founder  also of the "Charis Marien Maids" an apostolic community of the unmarried women, consecrated to Jesus, under the Diocese of Vijayapuram, Kottayam, Kerala.

He is the author of many books, poems, articles, in his native language, many of which have been translated into European languages. His book "33 Charismatic Prayers" is translated into several languages and it is used by thousands all over the world. "Prayers does wonders", (all about prayers), "He touched me and healed me" (All about the Holy Eucharist) "Healing to New life" (all about physical healing and inner healing), "Behold I knock" (great wonders in the soul when one opens the heart to God especially in confession), "Eureka" and "Enter the Ark".