Fr. James preached a retreat in Madrid for the charismatics from 12 to 14 of October 2001. More than 500 charismatics participated in it. Many inner healings and physical healings are reported.

On the 26th of July Father James Manjackal arrived in the city of Zagreb, he is being interviewed since the very same date by the Croatian media. On the 27th of July he started a retreat in the stadium Dom Sportova, the biggest indoor stadium in the city of Zagreb, although it is holiday time in Zagreb, over 12 000 people congregate everyday to assist his preachings.

His work is shown daily on TV and he is followed very closely by the mayor newspapers, TV- and radio-stations, he is still giving daily interviews and press conferences. After finishing the retreat in Zagreb, he will hold four more retreats in the main Croatian cities

(Just click over the thumbnails to see an enlarged view).

July 19 to 23: Father James Manjackal for the third time in Medjugorje


19.07.2001 - Father James Manjackal, a catholic priest and a missionary of St. Francis  de Sales from India,  began his third seminar. He is gifted with many  graces of the Holy Spirit,  which he transmits with much zeal to the faithful.  The first seminar, given  in 1999, when F. James  was not yet known in this area, gathered over  400 participants.
The second, given in 2000,  attracted over 800 faithful. Severalthousands  attended the final Mass.

This year, because of the great interest, the  seminar takes place in the Sport Hall in  Ljubuski, and there are about 5000 participants. The evening Mass will be celebrated within the framework of the evening prayer programme in  Medjugorje. There is enough place for  everyone, and we expect even more faithful.

The goal of these seminars is, first of all, in the renewal of faith in Jesus Christ, the only Saviour, and the practice of Christian life within the Church. It is also, however, for the spiritual healing of inner wounds received from others, for the healing of injustices a person has suffered from, and for the healing of sins a person has committed. The condition of healing is to forgive oneself, to
forgive others and to receive the grace of forgiveness from God in the sacrament of Confession. It is well known that physical healings take place during Fr. James' seminars, which is a special gift of God and a sign that Jesus is alive today just as He was when He walked in Galilee.

The faithful received Fr. James with a long and hearty welcome: they have taken Him into their hearts and they feel that he belongs to them. The greeting word was given by Fr. Branimir Musa, the Superior of the Franciscan monastery of Humac. Father James' words quickly touched and put fire into the hearts of the participants, among whom are many sick persons.

The Maltese Order, who is at the service of the pilgrims in Medjugorje during the whole summer, doubled its effectives for this  occasion, and will stay in Ljubuski at the  disposal of the faithful, in cooperation with local medical services.

Let us pray for Fr. James, for all participants and for the spiritual renewal of all Catholics.

Father James Manjackal: growth in faith and fidelity to the Church

24.07.2001 - During the seminar, which took place July 19 to 23 in the Sport Hall in Ljubuski, in the presence of almost 5000 faithful, Fr. James Manjackal led every day the prayer in Medjugorje, after the evening Mass. There were much more than 20000 Croatian and foreign pilgrims, and many Croatian priests and religious sisters. To introduce the prayer before the Blessed Sacrament, Fr. James gave a catechesis of an hour, to strengthen the faith of the people. Prayers were oriented towards forgiveness and reconciliation, towards renouncing of sin and healing of personal and collective spiritual wounds from the past, towards the infilling with the gifts and fruits of the Holy Spirit. These prayers were accompanied by some physical healings, for which we wait for a medical confirmation.
At the end of the seminar, Fr. James proposed to the faithful to take following decisions:

1. I will be proud of being a Christian, because God Himself, incarnate Son of God, gives Himself to me in His love, and fulfils generously all my needs.
2. I will be faithful to the bishops, the Pope and the teaching of the Church.
3. I will receive Jesus joyfully in the Holy Communion, because He gives me life, light, joy, love and peace.
4. I will go to confession often (once a month) and will not omit the Sunday Mass, because Jesus' disciples meet there to celebrate His resurrection.
5. I will go for Mass even during the week whenever I can, to deepen my friendship and communion with Christ.
6. The Word of God - the Bible - is henceforth my principal reading, because through it, God Himself speaks to me; He gives me wisdom, strength and big promises, light on my way to eternity.
7. In the morning, at the beginning of the day, I will spend at least half an hour in personal prayer, so that every day may be blessed and joyful.
8. I will be a joyful witness of what Jesus does in my life, and I will work with all my strength for the spreading of His Kingdom of truth, life and love in all souls, which brings peace.
9. I will never again be afraid of any person, nor any sickness, nor of death, nor of temptations, but - with Christ - I will courageously overcome all difficulties of life.
10. I will never again choose sin or waste my time in vanities of this world. I will begin a new life with Christ.

After leaving Medjugorje, Fr. James Manjackal will preach several seminars all over Croatia.

-  In the Holy week, Fr. Manjackal gave a "prayer retreat" to over a 100 people at St. Bernhard, Schwäbisch Gmünd. On the following week 120 youth attended a Charismatic retreat with him in the same place. 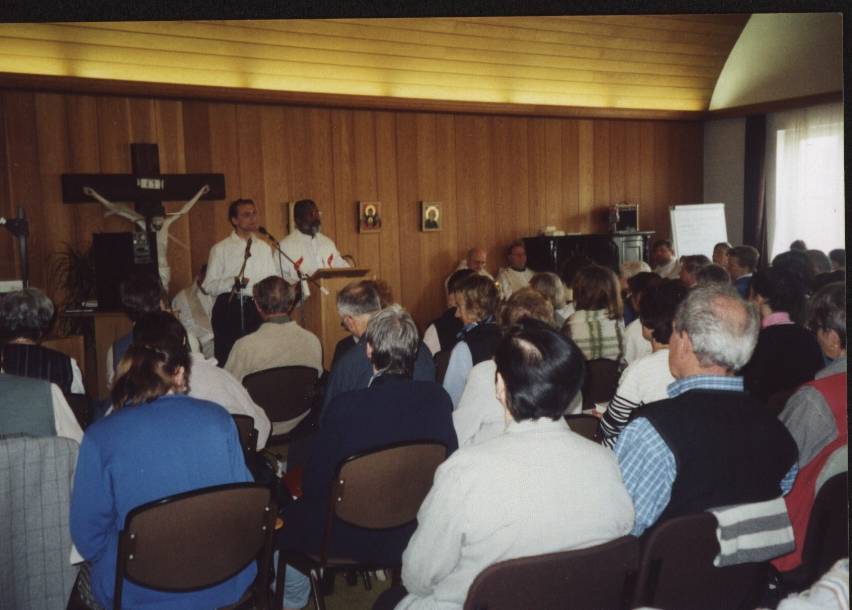 - Fr. James Manjackal, a catholic priest from India, has preached the Word of God in the Cibona Hall in Zagreb, Croatia. The porwer of preaching of the Word of God and prayers had a great impact on people who came in thousands. The blessing of the Holy Spirit filled the people of Croatia with the joy and the love of Christ. On the last day there were over 9000 people.

Fr. James Manjackal was interviewed by nespapers, television and other medies. This was a great opportunity for Fr. Manjackal to share the Word and the Love of  Christ with all those who were unable to come to the convention. The following is a paper cutting of the leading Croatian daily.

Just click over this thumbnail to see an enlarged view:

- In Vorau, Austria, Fr. James Manjackal conducted a "growing in the Spirit" seminar for about 200 people.